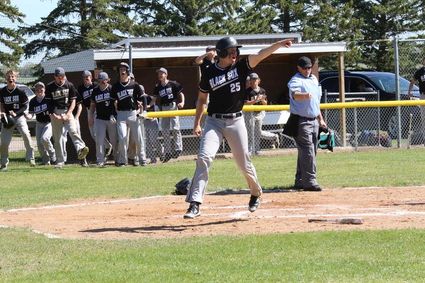 Nick Berglund shouts "Lets go!" and points at assistant coach Chris Bittmann after he and Trevor Waldo made it to home base during the match up between SNR and LaMoure/Litchville-Marion on Monday, May 24.

Sheyenne-New Rockford opened up regional play with a nailbiter, earning a 2-1 victory against Midkota/Dakota Prairie/Lakota/Griggs County Central in Tolna on May 20. Koby Duda started the game at pitcher. While he did have a lot of traffic on the bases, due to six walks and three hit batsmen, he did his job and gave up no hits or runs earning the win. Cole Hendrickson pitched well for the Musta...