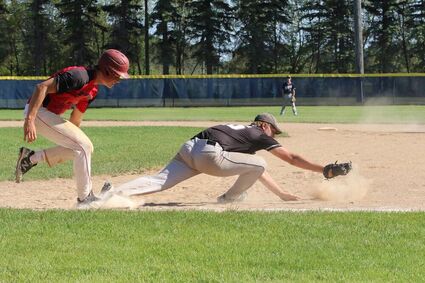 First baseman Nick Berglund attempts to get an out on Dane Hagler of Cando during the match up on Wednesday, June 30. The umpire determined Hagler was safe.

In a hard fought game, Post #30 lost to Cando in nine innings 10-8 on June 30. This was just their second loss of the season. Evan Ulrich pitched in his first game of the summer season and the rust was apparent. In five innings of work, he gave up six runs, with five walks, and seven strikeouts. Koby Duda relieved him and allowed four runs in four innings of work, with two walks and four strike...