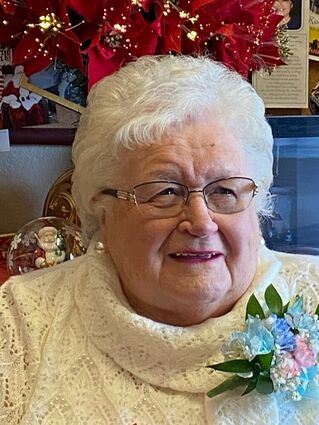 Mass of Christian Burial was held on Thursday, Feb. 17, 2022 at St. Michael's Catholic Church with Reverend Paul Schuster celebrating the Mass. Burial will be in the spring at the Howard Smith Ranch.

Frances was born the second of seven daughters to Mike and Olivia Medved at her grandparents' home, rural Minnewaukan on Dec. 21, 1926. She attended school at Crow Hill, Warwick and graduated from St. Mary's Academy in Devils Lake.

On Sept. 12, 1944, Frances married her childhood sweetheart, Howard Smith. Together they made their home at Woodlake for over 60 years where they lovingly raised their nine children. For the past six years, she resided at Lutheran Home of the Good Shepherd in New Rockford.

Frances worked on the ranch as a homemaker tending to her family. She was an involved member of St. Michael's and Christ the King parishes. Frances and Howard enjoyed traveling and spent several winters in Arizona. They also loved attending dances, fiddle festivals, and playing cards. Saturday nights were spent watching her favorite country music shows. The highlight of her week during basketball season was spent listening to the Four Winds boys' team, coached by her two sons. She was their biggest fan and never missed a game.

A special thank you to the staff at Lutheran Home of the Good Shepherd, Dr. Michael Page and Carrington Medical Center for providing unending care to our dear mother.