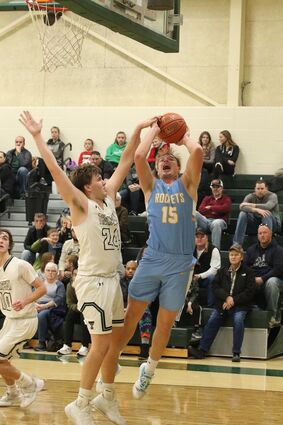 NR-S senior Nick Berglund takes a shot against the defense of Kyle Odenbach of the Tommies.

The New Rockford-Sheyenne Rockets varsity boys' basketball team opened their season with a heartbreaking 56-53 loss to the Thompson Tommies on Saturday, Dec. 11.

The Rockets' star senior, Nick Berglund, opened up scoring with a towering hook shot on the game's first possession, just a taste of what was to come in the first half. Berglund scored 16 of the Rockets' 24 first-half points, and his p...