Archival Anecdotes: No room for embarrassment 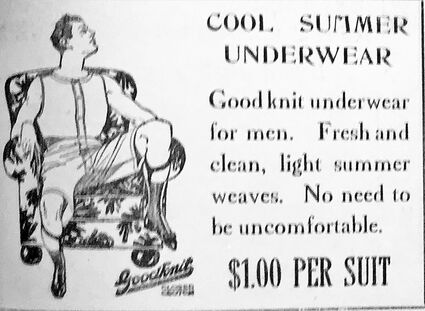 A full page ad from Rodenberg-Schwoebel Department Stores featuring many summer styles appeared in preparation for a sale on June 5, 1914 in the New Rockford Transcript. Among the advertised selections were both Cool Summer underwear for men and the New Style Corset.

Undergarments are one of those rarely talked about luxuries. Assuming (as I always have) that earlier generations were more prudish and cautious about such private matters, I am still surprised each time that I have encountered undergarments within the Eddy County Museum collections.

I couldn't understand why anyone would donate their most intimate clothing to be on public display. But maybe there is nothing to be embarrassed about.

In those days, undergarments were essential for thermo-regulation. Certain fabrics and knits provided insulation, while others wicked away moisture and helped the wearer stay cool. In addition, they were made with far more durability than the mass produced undergarments of today.

For men, long underwear or 'long-johns' and union suits helped to provide an additional layer of protection, both for the wearer who might have been working on the farm or on the railroad. Regardless of the kind of work a man did, he was likely to sweat, especially in the summer months. His clothes survived the effects of the heat thanks to the "light summer weaves."

The ad for the New Style Corset came at a strange time for ladies' undergarments. The restricting Victorian corset had long been tossed out with the wash, but the brassier had yet to be perfected and sold nationwide. Billowing corsets and slips were the undergarments of choice for young women. 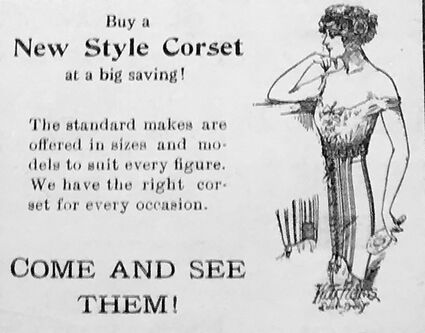 Lest you think that all undergarments came from the department store - Elsie Kerr donated a pair of white bloomers that she made from flour or sugar sacks in 1918.

These loose-fitting trousers were often worn under dresses by women. They were popular during Victorian times, as they were promoted by Amelia Bloomer in 1849.

Other undergarments within the museum's collection include:

The Eddy County Museum is open to visitors on Sundays until Labor Day 1-4 p.m.