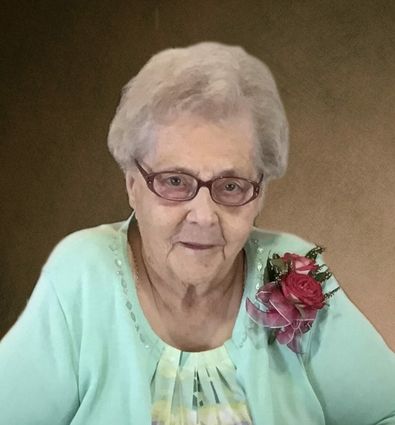 Beatrice "Beaty" was born August 24, 1929, in rural New Rockford, N.D. She was the daughter of Hugh and Anna O'Connor. She grew up on the family farm, attended country school close to home, and went to high school at St. James Academy in New Rockford. After high school, she remained on the family farm, where she was in her glory, helping with all the chores, planting, harvesting and caring for all the animals.

On January 15, 1952, she married Jerry Engels. They were the very first couple to be married at the Bremen Catholic Church in Bremen, N.D. Together they raised 10 children, five girls and five boys, on the farm where they farmed and ranched for many years.

She was a very active member in the St. John's Catholic Church for many years. She also belonged to the American Legion Auxiliary, St. Gerards Circle and Card Club in Bremen, Homemakers, Circle Trail Riders, and the Red Hat Society.

Beaty was preceded in death by her husband, Jerry; her daughter, Susan Bina; and son-in-law, Lester Risovi.