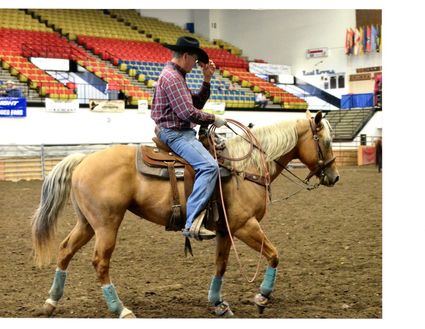 John Grann is shown here with his horse.

The NDRA rodeo, held on Sunday, March 14, was the first NDRA rodeo of the year. There are close to 20 rodeos scheduled for 2021. The top, 12-point earners from the 2021 season will advance to the two-day finals in mid-September, and the year-end champion in each event will be determined there.

The Winter Show rodeo had 333 contestants, with a total of 388 entries. Some individuals entered in multiple events.

John Grann of Sheyenne was a contestant in the senior men's breakaway event. John had a time of 3.5 seconds and received fourth place.

Mariah is the daughter of Jeff and Shannon Anderson of Hamar, N.D.

The Zieman brothers, Nate and AJ, were contestants in the team roping event. AJ was the header, and Nate was the heeler. The header chases after the steer and ropes either both horns, the head and one horn, or the neck. The header then wraps his rope around the saddle horn and rides to the left. While the header rides to the left and tows the steer behind his horse, the heeler then ropes both hind legs. Jory Boote was also a contestant in the team roping event. Nate, AJ and Jory all received a no-time score and didn't place.

Connie Soderholm and Jade Boote were contestants in the ladies breakaway event. Connie had a time of 3.7 seconds and received 17th place. Jade received a no-time score and didn't place.

Jory Boote was also a contestant in the tie-down roping event. He had a time of 13.4 seconds and received eighth place.

Jade and Jory are the daughter and son of Allan and Nikki Boote of Binford, N.D. They are both enrolled in college at Dickinson State University.