Burn ban in effect for all of Eddy County 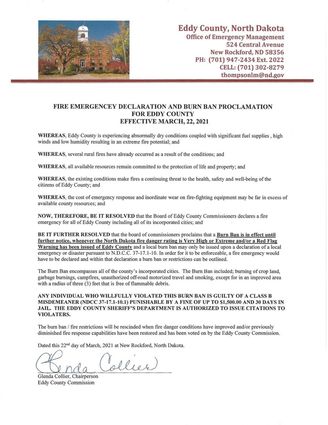 A burn ban is effective for all of Eddy County beginning today, March 22. The Eddy County Commission put the ban in place at a 9:45 a.m. meeting this morning.

The full text of the ban is below.

winds and low humidity resulting in an extreme fire potential; and

WHEREAS, several rural fires have already occurred as a result of the conditions; and

WHEREAS, all available resources remain committed to the protection of life and property; and

WHEREAS, the existing conditions make fires a continuing threat to the health, safety and well-being of the

citizens of Eddy County; and

WHEREAS, the cost of emergency response and inordinate wear on fire-fighting equipment may be far in excess of available county resources; and

NOW, THEREFORE, BE IT RESOLVED that the Board of Eddy County Commissioners declares a fire emergency for all of Eddy County including all of its incorporated cities; and

BE IT FURTHER RESOLVED that the board of commissioners proclaims that a Burn Ban is in effect until further notice, whenever the North Dakota fire danger rating is Very High or Extreme and/or a Red Flag Warning has been issued of Eddy County and a local burn ban may only be issued upon a declaration of a local emergency or disaster pursuant to N.D.C.C. 37-17.1-10. In order for it to be enforceable, a fire emergency would have to be declared and within that declaration a burn ban or restrictions can be outlined.

The Burn Ban encompasses all of the county's incorporated cities. The Burn Ban included; burning of crop land, garbage burnings, campfires, unauthorized off-road motorized travel and smoking, except for in an improved area with a radius of three (3) feet that is free of flammable debris.

ANY INDIVIDUAL WHO WILLFULLY VIOLATES THIS BURN BAN IS GUILTY OF A CLASS B MISDEMEANER (NDCC 37-17.1-10.1) PUNISHABLE BY A FINE OF UP TO $1,500.00 AND 30 DAYS IN JAIL. THE EDDY COUNTY SHERIFF'S DEPARTMENT IS AUTHORIZED TO ISSUE CITATIONS TO

The burn ban / fire restrictions will be rescinded when fire danger conditions have improved and/or previously diminished fire response capabilities have been restored and has been voted on by the Eddy County Commission.