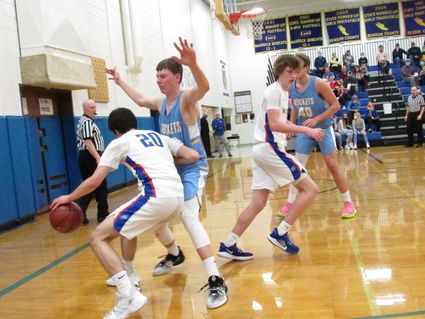 NR-S senior Johnny Grann plays defense against Benson County senior Blayne Anderson. Both Grann and Anderson logged the most points for their teams.

On Tuesday, February 2, the New Rockford-Sheyenne Rockets headed to Maddock to challenge the Benson County Wildcats. The Rockets brought home a victory of 56-40.

Seniors Johnny Grann and Evan Ulrich started off the game with a three-pointer each. The Rockets had a four point lead on the Wildcats after the first quarter.

Grann put up two more three-pointers in the second quarter to put a 12-poi...