The little box that makes a difference 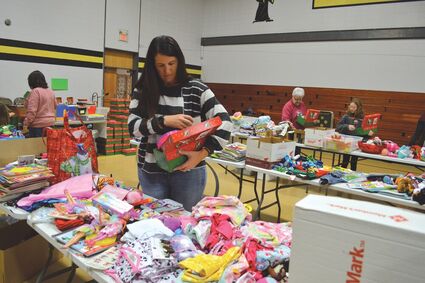 Amanda Croegaert of Bismarck helped put together shoeboxes for Operation Christmas Child at the Open Season Lodge in Sheyenne on October 29.

Few things in the area of meetings or events surprise me these days, especially after some 60 years or more of attending just about all types of gatherings involving people and their programs.

But this one did . . . the situation/gathering at the Open Season Lodge in Sheyenne on Saturday, October 29. It was the day set aside to fill shoeboxes. These are boxes filled with clothes, goodies, personal items, fun things, dolls and small blankets. Just a host of items that children around the globe receive, thanks to the donations and time spent by volunteers to make it all possible.

This program, Operation Christmas Child shoebox gifts for the Samaritans's Purse project, has been giving to children worldwide since 1993. That Saturday in Sheyenne, volunteers packed 632 boxes.

Now I had heard about the project and knew a bit of what was happening since my wife has spent the past year knitting tiny little blankets "for the shoeboxes." The little blankets would hold little dolls that were packed and shipped off with other items carefully packed in custom made shoeboxes . . . errrr . . . boxes the size of a shoebox.

"Hold that Saturday in your schedule," my wife says to me. "We're going to Sheyenne where I'm taking my blankets." So, I reserved the date, glad I did.

I was taken aback when we walked into that gymnasium, where half of the floor was filled with things to be packed by volunteers. Young and not-so-young were busy as bees filling the boxes in ways they could get the most into the small area so somewhere a child would receive a lot of things. Small things, but yet I'm thinking appreciative . . . especially if you have nothing to start with! There were volunteers from Fargo, West Fargo, Bismarck, New Rockford, Carrington, Dickinson and presumably other cities, as the day went on, and people coming and going . . . all assisting with the packing.

Locally, my wife was introduced to the program by our daughter in New Rockford where several ladies, for the past six years, have been part of the program. Debbie Moos of Fargo serves as coordinator and several of her relatives all play a big part in the success of packing shoeboxes. For Moos, it is a yearlong project as she begins preparation for next year when this year's boxes are packed.

So, yes, this one surprised me. I had heard of the program, but a firsthand look at the generosity of many really impacted me . . . if not for just the few hours we spent at the Lodge in Sheyenne.

And, did I say, they told me about the coffee and rolls that were available in the kitchen area. Darn good caramel rolls, too!

A few things that I've observed over the past few weeks:

• Sad, but true, it was reported following Tuesday's election that only 43 percent of eligible voters in North Dakota took time to go to the polls and vote. That's less than half, folks, according to my math! So, don't complain especially if you didn't vote. Guess it's just a way for those to say just how much they really like politics!

• Say it isn't so . . . I saw it Wednesday noon. A true sign of things to come was when the North Dakota DOT orange truck with snow plows attached was filling gas at Cenex. The weather people are predicting five to 10 inches of snow yet this week. We'll see, they've been wrong before. Moisture would be nice but not white moisture.

• Tip of the hat here in Carrington to the city for finally a bit of work on Main Street to alleviate a string of bumps that have been there for years. Better than before, but there are other streets that need help, too.

And, another tip to Red River Valley and Western Railroad for a very excellent job in repairing the crossing on Main at the site of the old O&M Elevator.

For folks in New Rockford, we notice that streets there finally got a new coat of blacktop. That's been a long time a comin'.

• Haven't seen too many hunters with deer on trailers or hanging from racks on their cars as deer season recently opened. Not that many deer or just what's the reason? Seems strange not to see or hear of that big buck . . . or did it get away? • As this is being written, both the Cardinal and Rocket girls' volleyball teams will be playing for Regional championships and chances to represent their respective Regions at the state tournament. Win or lose, great job to players and coaches of both teams.

A few from the internet:

To my neighbors who complained to the city about my chickens: I want to thank you. I didn't know I'm allowed to have up to 25, and I don't have even half that many. So thanks again, I learned something!

I saw a sign at the church this spring during that storm. IF YOU'RE PRAYING FOR SNOW, PLEASE STOP!!

HONK! If you love JESUS! Test while driving if you want to meet Him now!

To whoever stole the air conditioning units from the church: Keep one, it's really hot where you're going!

God didn't create anything without a purpose. But mosquitoes come really close!

Parting Shot: "What you lack in talent can be made up with desire, hustle and giving 110 percent all the time." - Don Zimmer