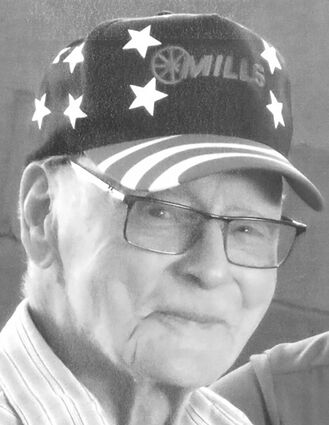 Leroy A. Larson, age 99, of Svea, Minn., formerly of Sheyenne, N.D., died Friday, November 4, 2022, surrounded by his family at his home. His funeral service was held at 11:00 a.m. Friday, November 11, at Svea Evangelical Lutheran Church with burial in the church cemetery. Visitation will be 5-7 p.m. Thursday at the church and will continue one hour prior to the service. Arrangements are with Harvey Anderson Funeral Home in Willmar, http://www.hafh.org.

Leroy Alton Larson was born July 7, 1923, in Vahalla Township, Wells County, North Dakota, to Olof and Clara (Matson) Larson. He grew up on the family farm in Vahalla Township, and was baptized and confirmed at Augustana Lutheran Church. He attended country school, and later began farming with his father. On September 22, 1946, he was united in marriage to Deloris Allinder in Svea and four children were blessed to this union. They lived in Sheyenne, N.D. until 1951, when they moved to Svea, where Leroy farmed for a few years. He later began driving truck, which he continued to do until he retired at age 82.

Leroy was a member of Svea Evangelical Lutheran Church, where he served as treasurer and as an usher. He was also a member of the Eagles Club in Willmar. Leroy enjoyed bowling, playing horseshoes, and hosting pool parties at their home. He loved spending time with his family and enjoyed attending his grandchildren's activities.

He is survived by his children: Trudine (and Doug) Gorans of Lake Lillian, Minn .; Karen (and Dean) Burau of Darwin, Minn .; Carleton Larson of Willmar, Minn .; and Larry (and Kathy) Balvitsch of Foley, Minn .; daughter-in-law: Judy Larson of Svea, Minn .; 10 grandchildren; and 21 great-grandchildren; and several nieces and nephews.

He was preceded in death by his wife: Deloris in 2003; son: Curtis in 1989; brother: Chester Larson; and sisters: Constance Zurcher, Marvel Granberg, and Arlene Balvitsch.