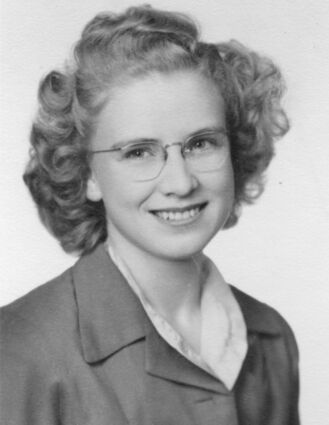 Elaine Charlotte Johnson was born to Harry and Alma Johnson on July 6, 1926, at their farm home in Pleasant Prairie Township, Eddy County, North Dakota. She was baptized at Kvernes Lutheran Church; her pioneering grandparents, and many uncles and cousins are laid to rest in the Kvernes Pioneer Cemetery.

Growing up on a farm during the depression years offered an indelible lesson of family and community that supported one another and lived in joy with what they had. Throughout her life she shared the values, the skills, and the memories she cherished from her formative years on the farm.

Elaine attended consolidated school in Brantford, followed by one year in New Rockford in 1943. Many of her fondest memories were of her days at the Brantford school, entering declamation contests, participating in one act plays, and learning to play the coronet. Without graduating high school in the WWII years, she enrolled in Concordia College, Moorhead, Minnesota. She left before completing her BA to teach a year in a rural Sheyenne school.

In the summer of 1947, Elaine drove away from the farm with her parents, Harry and Alma Johnson, for the last time. Due to declining health, Harry was forced to leave farming and Elaine drove the family to Marysville, Washington, where they permanently relocated. The New Rockford Transcript subscription followed them there and Elaine and her parents maintained very close ties with their beloved Pleasant Prairie farm community for many years. Elaine returned many times, especially to spend time with her special aunt and "second mom," Lucille Kuehn, as well as to visit Richters, Andersons, Kuehn cousins, and other friends and neighbors.

Elaine married Rev. Richard (Dick) Rodning on January 6, 1948, in Marysville, Washington. Elaine and Dick had 5 children. When the youngest started school, she finished her BA degree. She then began teaching home economics full time. After a move to Montana, she also served as a county extension agent.

In her retirement years she was exceptionally active in her church. She served in a variety of capacities for Lutheran community services. She taught for LAMP in the Haida community on the Queen Charlotte Islands of British Columbia. She represented her synod in Namibia and South Africa. She was president of the synod's ELCA Women's organization.

Elaine was a tailor and excellent seamstress. Her talents are perhaps most remembered for the countless number of quilts she participated in making for international relief, an accomplishment that is honored with a paving stone at Lutheran World Relief, Baltimore, Maryland. She was also very active in gathering medical supplies for Global Health Ministries and supporting Bread for the World.

The Memorial Service was held at St. Mark's Lutheran Church by the Narrows, Tacoma, Wash., on September 10, 2022.

Memorials were suggested to Lutheran World Relief (Baltimore, M.D.) or locally to the upkeep of the Kvernes Cemetery, Foster County, North Dakota.