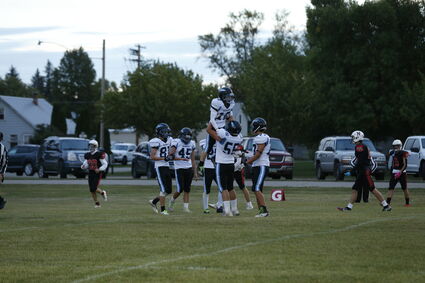 Brody Weisenburger (55) lifts up teammate Connor Knatterud (12) after he scored a touchdown against the North Star Bearcats.

Going into Cando on Friday, Sept. 23, the New Rockford-Sheyenne Rockets must have been feeling pretty good about their chances.

The Rockets had just won two straight games and were undefeated in region play, while the North Star Bearcats had just lost three in a row and were winless in Region 4.

However, what occurred that Friday night was disastrous for NR-S.

At first, the game began relativel...