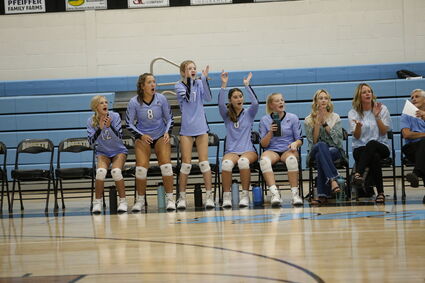 The Rockets' bench no longer has just two players supporting their teammates on the court, they have five. From left to right: Emmie Belquist, Ava Bullinger, Alivia Yri, Logan Cudworth, Lora Wobbema, and coaches Kayahna Hopfauf and Sara Myhre cheer after the Rockets scored another point.

After two tough non-region losses, the New Rockford-Sheyenne Rockets knew they needed to change up their game plan. With a new rotation and an additional three players to the varsity bench, the Rockets were able to defeat the Barnes County North Bison 3-0 at home.

The Rockets had previously been running a 5-1 rotation, with NR-S sophomore, Kaiya O'Connor, being a full-time setter. That rotatio...