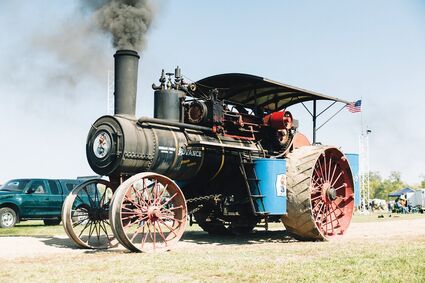 For many residents in New Rockford, a.k.a. the steam engine capital of North Dakota, and in the surrounding community, the month of September can only mean one thing: It's finally time for the Steam Threshers Reunion.

From September 16-18, the 64th annual Central North Dakota Steam Threshers Reunion (CNDSTR) will take place at the Eddy County Fairgrounds, and once again attendees will have an opportunity to meet a very special and rare engine.

This year's feature is Rumley, a company founded in 1853 by Meinrad Rumley shortly after he emigrated from Germany in 1848.

For the John Deere feature at last year's reunion, the famous "Bathtub D" tractor made the long trek to New Rockford. This year, an equally one-of-a-kind engine will be in the spotlight.

According to Lance Straabe, a member of the CNDSTR, the engine is a 1910 40 horsepower cross compound steam traction engine, which was built by the Advance Thresher Company of Battle Creek, Michigan.

"It is the largest engine Advance Threshing Company manufactured and the only known one of its kind still in existence," said Straabe.

In 1911 and 1912, Meinrad Rumley began purchasing other firms in the agricultural equipment business, including Advance Thresher Company, which is why the 40 horsepower Advance engine can get the spotlight for this year's Rumley feature.

The engine, according to Straabe, has plenty of unique features.

"It was recommended by Advance Threshing Company to order this engine with steel wheels, however, this one was ordered with cast iron wheels," said Straabe. "There were only seven 40 hp (horsepower) engines that made it out of the factory on Steel wheels."

The engine is a rear mount, meaning the rear axle is mounted to the rear of the boiler, and the engine's rear wheels stand 78" tall and are 30" wide. The engine also has an interceptor valve that, when opened, turns it into a double-simple engine.

The engine was built mainly for plowing, he added, and was hitched to a 10 bottom plow in Chinook, Montana.

"Norman Pross bought this engine from Mr. Ole Lundeen in the early 1970's," said Straabe. "The engine was still operational when Norman hauled it to North Dakota and restored it to the engine that it is today. It is Owned by Mark Pedersen of Luverne, N.D."

Be sure to view this one-of-a-kind engine while you can at this year's Steam Threshers Reunion, where, as always, it will be joined by many other unique and interesting steam-powered tractors.

Family-friendly events will also be available throughout the weekend for attendees to enjoy.

Among the activities throughout the weekend will be a "slow" tractor race, a music and talent show, a kid's pedal tractor pull, a flea market and much more. There will also be a tractor ride on Thursday, Sept. 15.

Concessions and meals will also be available at the grounds for all three days.