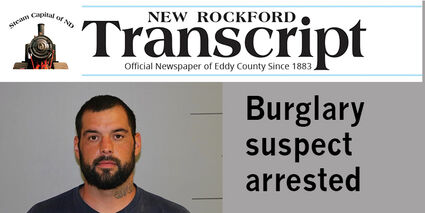 The man accused of breaking into Hanson's Bar and the Eagles Club in downtown New Rockford has been arrested.

According to Eddy County Sheriff Paul Lies, 34-year-old Matthew Braun was served a search warrant at his home in Kindred, N.D. on Sunday, Aug. 14, where he was arrested and taken to the Stutsman County Correctional Center.

Braun was in town working at a construction site, said Lies, and was caught after multiple cameras placed him and his vehicle, a mid-2000s Chevy Trailblazer, at the scene of the burglaries on the morning of Saturday, Aug. 6.

"When we looked at the downtown cameras, we found a vehicle pulled in at 3:41 a.m. next to the bowling alley," said Lies. "... when the vehicle left [New Rockford] it turned around on the street and headed back to the west without turning its lights on, so that was suspicious."

According to the criminal information filed against Braun, Hanson's Bar and the Eagles Club estimated the total combined losses to be over $18,800. Each business also estimated more than $30,000 in property damage.

In an attempt to identify the suspect, the Eddy County Sheriff's Office sent out a flier with pictures of him and his vehicle to area law enforcement agencies.

A police officer from Bismarck reached out soon after, saying he recognized the Chevy Trailblazer, which was silver and had pinstripes, and the suspect, who was already on probation for burglary.

Braun has a lengthy criminal record and has been charged for burglary and theft of property numerous times dating back to 2008. Most recently, he pleaded guilty to a theft charge in Ransom County in September 2019.

With the help of everyone involved, especially those who had surveillance cameras, the Eddy County Sheriff's Office was able to identify a suspect and make an arrest just eight days after the burglary took place.

Sheriff Lies expressed appreciation to those that had cameras and provided footage, which helped lead to the arrest.