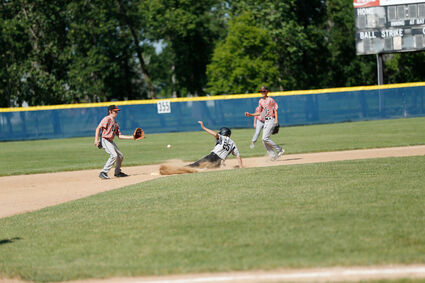 Easton Simon slides to second base during the first round of the District 4 Babe Ruth Tournament. The Sox' defeated Nelson County 10-0.

On July 13 - 14, the New Rockford Black Sox took on the Babe Ruth District 4 Tournament as the No. 2 seed, but would end up bowing out after just three games.

The tournament, which began in New Rockford, started well for the Black Sox as they took on Nelson County.

The Sox opened the scoring with two runs in the bottom of the first, and didn't look back. Another run followed in the third, befor...