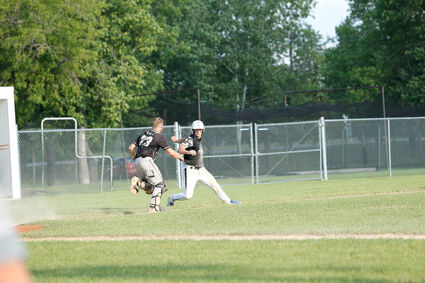 The third and final out of the seventh inning came from a "pickle" between third and home base. Post #30 catcher, Koby Duda, is shown above running down the Rattlers' runner, Seth Wolf, to tag him out and beat the Rattlers 5-0.

On Monday, July 11, New Rockford Post #30 ended their regular season with victory, defeating the Ashley/Linton/Wishek Rattlers 5-0 at home in their last regular-season match of the summer.

Post #30 did most of their damage early, scoring four runs in the first two innings, before adding an insurance run in the fifth.

From the batter's box, Connor Knatterud and Keaton Cudworth were particularly...