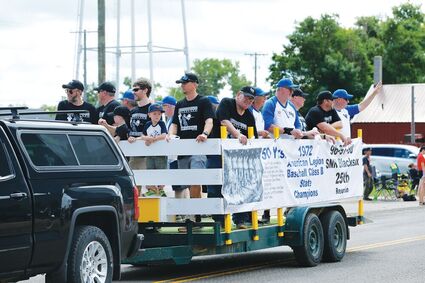 Members of the successful baseball teams of 1972 and 1996-98 parade down Central Avenue on July 4, wearing their team shirts and embroidered hats commemorating their history. The parade capped off four days of events in New Rockford.

On Saturday, July 2, players from the state champion 1972 New Rockford Legion Baseball team gathered for their half century reunion.

They were joined by the 1996, 1997 and 1998 Black Sox teams, celebrating a quarter century since they qualified for the state tournament three years running.