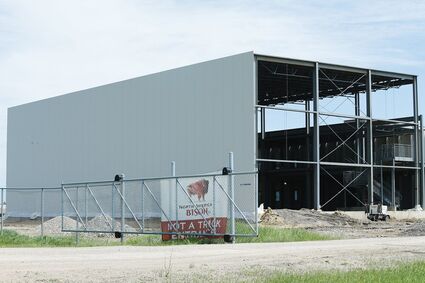 The west wall of the new addition at North American Bison, LLC had been completely covered with wall panels as of Wednesday, June 15. The panels are set by crane.

Since breaking ground on Sept. 16 last year, work on a major expansion project for North American Bison, LLC (NAB) has been well underway.

Passers by traveling on Highway 281 have likely seen the recent addition of wall paneling on the addition's west side.

Mike Jacobson, Vice President of Operations, said it's one of the last steps before work on the interior can begin.