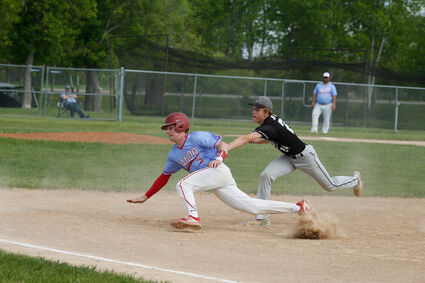 Cando Post 79 found themselves in a few pickles during the District 4 legion baseball game against SNR on Tuesday, June 7. SNR short stop, Luke Yri, ran down Garrett Westlind of Cando in between first and second base.

The Sheyenne-New Rockford Babe Ruth and Legion Black Sox teams kicked off their respective seasons last week, and both got off to a strong start.

Up first were the Babe Ruth teams from SNR and Nelson County on Monday, June 6.

The Black Sox began their season with a missed opportunity, managing to load the bases in the first inning without driving in a run. Thankfully, not every opportunity was...