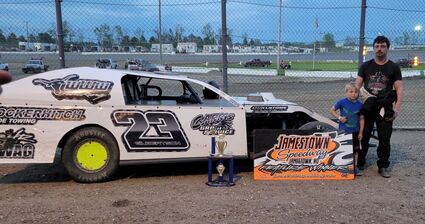 Wissota Midwest Modified series feature winner, Tanner Theis, stands with his son, Parker, after the race on Saturday, May 28.

After the race, Theis and his son, Parker Theis, posed for a picture next to the race-winning car and well-earned trophy at Jamestown Speedway. Theis also receiv...