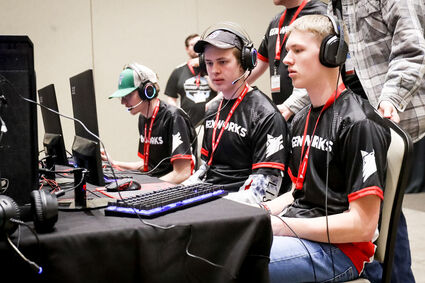 Jacob Louters (center) and Haydon Meier (right) get set up for their round of Rocket League at the Fenworks State Tournament on Friday, April 1.

On April 1-2, the first ever North Dakota esports championships were held at the Alerus Center in Grand Forks, and three students from New Rockford-Sheyenne competed at the event for The Triple Threat.

The Triple Threat had two teams qualify for state: one for Rocket League and the other for Apex. From NR-S, Jacob Louters, Taylor Anderson and Dominick Swinland took part.