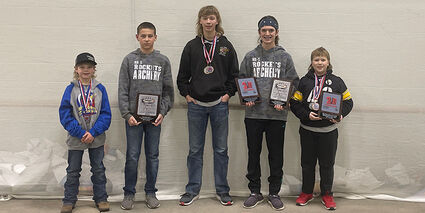 These five New Rockford-Sheyenne archers earned top 10 finishes in their divisions, to move on to compete in the NASP Western Nationals in Sandy, Utah on April 29-30. From left to right: Braylon Alfstad, Koy Zieman, Hunter Genre, Layton Jacobson and Fisher Genre.

To move onto the national NASP tournament, archers needed to place in the top ten of their division. NR-S had four arc...