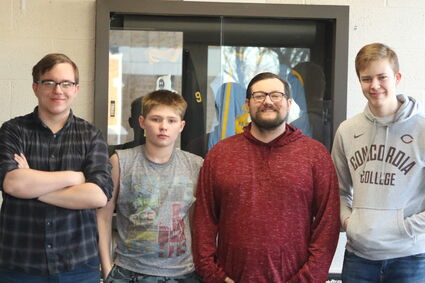 Members of The Triple Threat esports team from New Rockford-Sheyenne that qualified for the state tournament are pictured above, from left to right: Taylor Anderson, Dominick Swinland, coach Brady Eichelberger and Jacob Louters.

On April 1, New Rockford-Sheyenne is sending three players to the first ever N.D. state tournament for esports.

Fenworks, the company that facilitates high school esports competition in North Dakota, is hosting their first ever state tournament in Grand Forks, and 126 players from 30 teams across the state will travel to the Alerus Center for their game's championship.