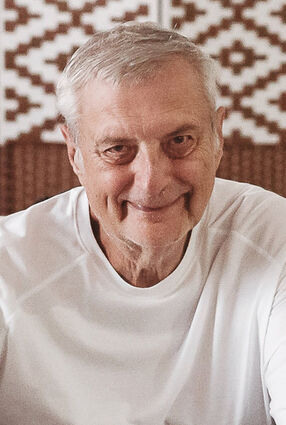 Bill was born in 1942 in New Rockford, N.D. He grew up on the family farm playing with his siblings and exploring the countryside. Bill graduated from Columbia High School in White Salmon, Wash., then obtained a B.S. in economics and a M.S. in agricultural economics at NDSU.

Bill was passionate about his career and valued education. He worked for the North Dakota Office of State Tax Commissioner for ten years where he assessed the fiscal effects of proposed tax legislation. He then accepted a position with Basin Electric Power Cooperative. Bill so enjoyed his work and the friendships he made there, that he stayed for 27 years, retiring as a senior forecast analyst. Bill loved numbers, energy, weather, technology, research, and data. His advocacy and use of personal computers in the office and at home, in the very early days of PCs before they became essential and commonplace, transformed his forecasting work. It also built a strong educational foundation for his children, as he shared his knowledge and introduced them to math and science programs on his computers at very young ages. Bill's foresight and insight were remarkable. He also had both a big picture perspective and an eye for details and gave the best advice.

Bill was warm, humble and devoted to his family while always staying a kid at heart. He was musically gifted and played the accordion, organ and the drums. A day on the Missouri River with his family and dog was the perfect day. He shared his knowledge of boating and water safety with the U.S. Coast Guard Auxiliary and volunteered with them for many years.

Bill and Becky retired on the same day in 2011 and enjoyed traveling, especially to visit family, in their golden years. They took trips to the Florida Keys, Maui, Minnesota, New Jersey, New York and the Pacific Northwest. As a young man, Bill developed an affinity for the Pacific Northwest, particularly of the Mt. Hood area, and held many fond memories from his time there with family as a high school senior. Visits to the farm where Bill grew up were peaceful for him.

His final journey was a brave battle with Alzheimer's. In his last months, he spent endless hours listening to his favorite rock and roll bands and enjoying a lifetime's worth of family photos.

Bill was preceded in death by his mother and father, Leone and Clair Cudworth, and brother-in-law Joseph.

The family requests donations to be made to the Alzheimer's Association, in Bill's name, in lieu of flowers.