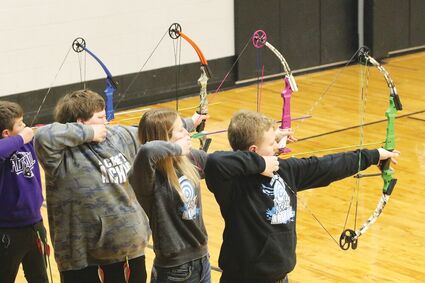 Jaydee Duda, Kaiya O'Connor and Kolton O'Connor were among Rocket archers who competed at the Kensal Archery Tournament on Sat., Jan. 22. Reporter Nathan Price caught up with head coach Mike Schaefer to talk about the upcoming season. There are 75 youth enrolled in the program, the best participation numbers of any activity at NR-S by far.

It's that time of year again - New Rockford-Sheyenne's archers are returning to the firing line, and it's already shaping up to be a successful season.

On Saturday, Jan. 22, at their first tournament of the year in Kensal, NR-S archers scored a total of 3,158 points, more than any other team at the tournament. Individual standouts were plentiful, with Hunter Genre finishing second among high sc...