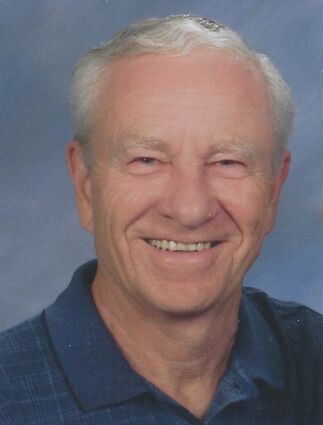 Richard "Dick" Hjalmar Hedin, 87, of Spokane, Wash., passed away on January 19, 2022, after a brave battle with dementia. While his short-term memory was gone at the end, he never failed to recognize family and close friends nor to maintain his sense of humor. Throughout his life, he kept hidden an imaginary gun that he would aim at someone who said or did something out-of-step with his thinking – a pretend gesture that made his grandchildren and great-grandchildren break out in laughter.

Richard was born on December 1, 1934, to Hjalmer and Minnie Hedin on a farm near Sheyenne, N.D. After graduating from the high school located in New Rockford, N.D. in 1952, he joined the Navy serving in the Korean War. After an honorable discharge in 1955, he enrolled for one year in North Dakota Agricultural College (NDSU). Richard also served in the Navy Reserve from 1955 until 1960.

While attending high school, he met Margaret Ann Hedin (Rieder) and they later became a couple. They were married November 3, 1956, and went on to have three children. She was the love of his life, and they were devoted to each other. They remained married until Richard's death – a loving relationship lasting over 65 years.

After marriage, Richard landed his first permanent job as a manager for Gambles Mercantile in New Rockford, N.D. staying there for a few years. In 1960, he accepted a position to sell commercial insurance for Federated Insurance, requiring the young family to move to Sydney, Mont. Richard stayed in the commercial insurance industry his entire career with job changes requiring locating to Owatonna, Minn., West Fargo, N.D., and Coeur d'Alene, Idaho. After retiring in 1997, he eventually moved to Spokane, Wash. in 2004 to live in the same city as his three children and their families. Over the years, Richard and Margaret Ann made many trips back to New Rockford, N.D. to visit family and friends – a place they always identified as home.

Richard was a loving, hardworking man, determined to provide for his family and give them the secure, happy life he felt was important. His family meant more to him than anything else in the world, something he often mentioned. He was unendingly proud of his three children, three grandchildren and eight great-grandchildren who all lived near him in Spokane, Wash. Richard "papa" was active in all their lives throughout the years, helping to raise three generations.

Richard was also a passionate gardener and could often be found working outside striving for the best-looking yard in the neighborhood. Through the years, he enjoyed camping with his family in his StarCraft tent trailer, boating on Lake Coeur d'Alene, fishing for trout and walleye in Minnesota, traveling to new and interesting places including several countries in Europe, going to coffee with old friends, and relaxing at the condo in Palm Springs.

Anyone who knew Richard acknowledged that he was the most loving father, grandfather, great-grandfather, and husband a family could ask for.

The family requests that all cards and notes are sent to Margaret Ann Hedin at 3515 E. Leisure Lane, Spokane, Wash., 99223. In lieu of flowers one may make a donation to a charity of their choice. There will be a celebration of life on February 26, 2022, and an interment of the ashes into a family cremation bench at Greenwood Memorial Cemetery in Spokane, Wash. in early summer. Additional information for both events will be shared with extended family and close friends at a later date.