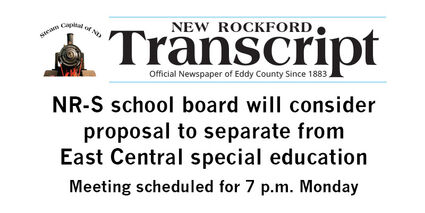 At their meeting on Monday, Nov. 15, NR-S Superintendent Jill Louters will ask the school board to withdraw from the East Central Center for Exceptional Children Special Education Unit (East Central).

This is the second time Louters has asked the NR-S school board to consider special education services aside from East Central. The school board unanimously voted "no" to the request in January 2018.

In her Summary of Proposed Action, which is posted in the board packet on the NR-S school website, Louters gives two primary reasons for her request:

"A marked decline in organizational performance over the past several years."

"Escalating costs which are no longer sustainable."

When Louters last proposed evaluating special education alternatives during the 2017-18 school year, the district had budgeted $485,000 for East Central's services, which equated to roughly 11.5 percent of the total budget.

In her proposal, Louters puts forward two alternatives, both of which include utilizing services from the Lake Region Special Education Unit - a special education cooperative based in Devils Lake, which serves over 600 students from 12 member school districts.

Both options would also invite the special education teachers and paraprofessionals that currently work in the building to leave East Central and come under contract with NR-S.

• Plan A provides three FTE (full time equivalent) teachers and seven paraprofessionals, and would cost the school $460,471.56 per year.

• Plan B provides two FTE teachers and seven paraprofessionals, and would cost the school $393,253.29 per year.

East Central Director Ashly Wolsky told the Transcript Friday that aside from an internal memo, or 'pink note,' Louters sent inviting East Central staff to join NR-S, she has not had any discussion with the staff regarding the proposal to leave East Central.

In her proposal, Louters seems to suggest that special education teachers might see a pay cut under NR-S, writing, "Attempts will be made to address any pay discrepancies between the two contracts through offers of summer work or additional contract work."

Meanwhile, Louters' proposal would allow paraprofessionals to come under contract with NR-S "at the same hourly rate of pay AND be offered a single health insurance policy ... [which] East Central does not currently provide."

Wolsky also contends that the cost comparison between East Central and LRSE that Louters presents is not "apples to apples."

"My concern is that if [NR-S] leaves East Central they're going to a much larger unit, almost double the size," Wolsky said. "So as far as keeping it small and local, the services will drastically change, and I don't think Dr. Louters is really comparing apples to apples."

For example, "the transition coordinator is not available at Lake Region," Wolsky explained. Vickie Becvar currently fulfills this role within East Central at little cost to the member school districts, Wolsky added, as the expenses for her position are primarily paid for by a grant through vocational rehab.

As it pertains to East Central's alleged "marked decline in organizational performance over the past several years," Louters argues that East Central's students are "significantly non proficient" in math and reading according to state and STAR testing.

However, Wolsky contends that it shouldn't be a surprise if their students are "significantly non proficient" in math or reading.

"Anyone that has knowledge of special education knows that there's a reason why our students are in special education," Wolsky said. "If they were scoring proficient in reading and math, [NR-S] wouldn't need our services."

Wolsky informed the Transcript that neither an OCR complaint nor a FERPA complaint has ever been brought to her attention.

Should the school board vote to withdraw from East Central, there's no guarantee that NR-S would be able to join the LRSE. The LRSE board, composed of the superintendents from their member school districts, would have to approve NR-S's request to join with a 70 percent yes vote.

Likewise, no guarantees were made that the teachers and paraprofessionals that currently work in the NR-S Public School would agree to leave East Central.

The NR-S school board will convene for their meeting at 7 p.m. in the collaboration room on Monday, Nov. 15. As this topic is on the agenda, members of the public will have an opportunity to address the board about their support or disapproval of the plan to withdraw from East Central during the public comment period at the beginning of the meeting.