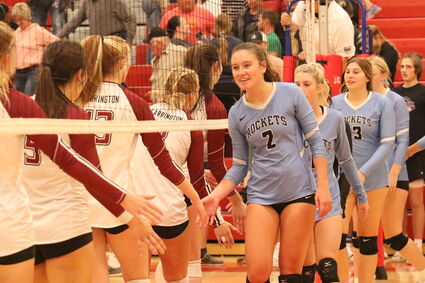 Even after a tough loss to Carrington, the New Rockford-Sheyenne varsity team still kept smiles on their faces when shaking their opponents hands after the match.

The New Rockford-Sheyenne Rockets traveled to Carrington to take on the local rivals in their home gym. The Rockets were defeated in three sets.

The Cardinals had many kills, most coming from senior middle blocker Sydnie Grager. Grager had a total of 16 kills against the Rockets. Also in double digits for the Cardinals was junior Haley Wolsky, who had a total of ten kills. Kelsie Belquist led...