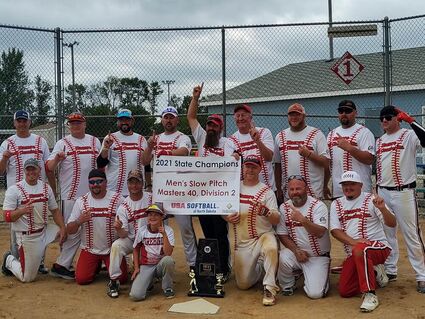 Next up on the bracket was the Minot Jus For You/Miller Law Office team. This team defeated Hamre Seed in the 2020 state tournament. They knew this was going to be a tough seven innings. Hamre Seed started off strong in the top of the first with nine runs, but lost momentum and only added one more run in the last six innings of the game. Minot Jus For You/Miller Law Office defeated Hamre Seed 19-10. As if the loss wasn't bad enough, player Allen Troy suffered an injury, which meant he could no longer play the rest of the weekend. With this tough loss, Hamre Seed was ready to fight for that trophy.

The Ransom County Wombats were the next competitors. With a slow start for both teams, the score was tied 3-3 after the third inning. Hamre Seed would then put up six runs in the fourth inning, and the Wombats would put up three to bring the score to 9-6. But the Wombats came back in the fifth with five runs to take an 11-10 lead. Hamre Seed scored another run in the bottom of the seventh and held the Wombats to take the 12-11 win. During this game, Elliott Belquist suffered an injury. Belquist was able to play the rest of the weekend as pitcher, but he was unable to run the bases.

Next up, revenge on Minot Jus For You/Miller Law Office. With three runs in the first and seven runs in the second, Hamre Seed would take a 10-1 lead. Even though the nine-point lead was exciting, Steve Elfman would suffer a knee injury rounding second base. With Elfman out, Darin Mikkelson would take his place. Nic Kreil also suffered an injury, but would continue to play the rest of the day. The 10-1 lead turned into a 10-7 lead going in the bottom of the seventh inning. Hamre Seed put up one in the seventh and Minot Jus For You/Miller Law Office put up three to come up short. Hamre Seed would take the 11-10 win to move on to the championship.