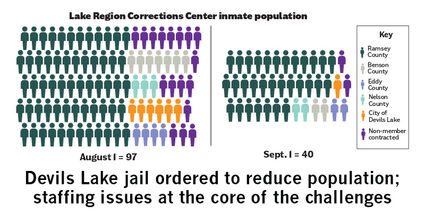 Lake Region Corrections Center was required to reduce its inmate population by nearly half per the Order of Non-Compliance. This chart illustrates the population both before and after the orders were issued. Graph by Amy Wobbema using data supplied by LRCC administrator Rob Johnson.

On Aug. 5, the North Dakota Department of Corrections and Rehabilitation (ND DOCR) issued an order of non-compliance for the Lake Region Correctional Center (LRCC) in Devils Lake, after it failed to meet standards during an inspection on June 14-15.

Of the 108 standards reviewed during inspection, the LRCC was found to be non-compliant with 13, most of which related to a lack of staff training....