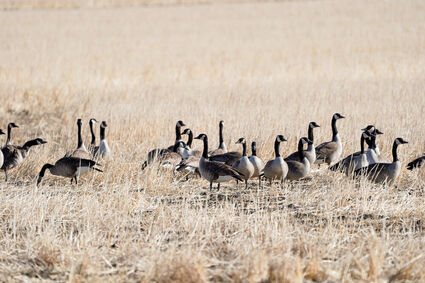 The first early Canada goose season was held in 1999 as a regional effort to help reduce resident Canada goose numbers in North Dakota.

August is no longer just about winding down the fishing season, and planning and preparing for upcoming hunting seasons.

While North Dakota has long had a crow season that got its start in mid-August, it wasn't until the changes several years ago which put the early Canada goose opener into the middle of the month that a significant season kicked off before Labor Day weekend.

The first early Canada goose season was held in 1999 as a regional effort to help reduce resident Canada goose numbers in North Dakota. Season dates covered the first few weeks of September, so most of the harvest took place before other subspecies of Canada geese started to migrate into the state.

At first, only a couple of counties in southeastern North Dakota were part of the early season, but the open area expanded to the entire state the next year, and the opening date was moved to mid-August in 2008. The 15th of the month has become somewhat of the standard opener, though lack of harvested crops for field hunting in some years can limit hunter interest, as can abundant mosquitoes and late summer heat. But still, the opportunity is there for hunters who are willing to take on the elements.

• North Dakota now has three Canada goose hunting zones, and opening day for early Canada goose is Aug. 15 in all three zones. Closing dates are Sept. 7 in the Missouri River zone, Sept. 15 in the western zone and Sept. 22 in the eastern zone.

• Early Canada goose limits are 15 daily and 45 in possession.

• Limits and shooting hours are different from the regular season, while the zone boundaries remain the same.

• Harvest Information Program certification is required, and beginning Sept. 1, a federal duck stamp for hunters 16 and older is also needed. Those who HIP registered to hunt the spring light goose conservation order in North Dakota do not have to register with HIP again, as it is required in each state only once per year.

• Waterfowl rest areas, closed to hunting during the regular season, are open during the early season. Most land in these rest areas is private, so hunters may need permission to access them.

Hunting of Canada geese in August and early September is intended to reduce local Canada goose numbers, which remain high. Game and Fish is attempting to provide additional hunting opportunities that can increase pressure on locally breeding Canada geese.

For additional information and regulations, hunters should refer to the Game and Fish Department website, gf.nd.gov.