Guest Review: DPRCA's "Life Could Be a Dream" is a delight 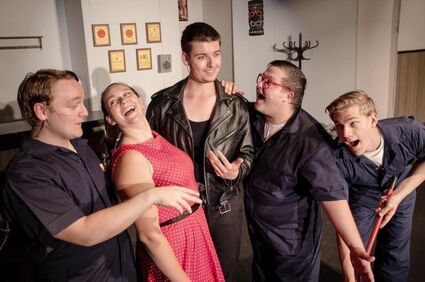 On Friday, June 16, I had the pleasure of attending DPRCA’s production of “Life Could Be a Dream” with my mom. This is the third time DPRCA has put on this hilarious, light-hearted play, but it was my first time in the audience.

The actors they cast this summer are suited perfectly for their roles, and they put on quite the performance that night. With everything from the music and choreography, to the sound and lights, DPRCA gave the community a terrific show, yet again!

Danny Hollander was quite a hoot as Denny. He made those haphazard dance moves early in the show look surprisingly real, because he can dance! Kelly Brown hammed up his role as Eugene and kept both of us laughing hysterically all night. McGwire Holman was such a sweetheart as Wally. He made Wally come to life as a real kid you know from school.

Lois, played by Tori Lynn, was my personal favorite. She brought a lot of emotion to both her character and the entire show with her amazing voice. Drew Relling was perfect for his role as bad boy Duke Henderson. His dancing and singing were spot on!

Overall this play was fantastic, and I would not hesitate to watch it six more times. The evening started off with great food from the Bistro, and ended with a meet and greet with the awesome cast. It was a five-star night! Make sure to hurry and book your seats for “Life Could Be a Dream” before it’s too late.

P.S. If Elliott Schwab ever decides to quit his day job as Artistic Director of DPRCA, I think he has a future in radio. His on-air moniker would clearly be Bullseye Miller!