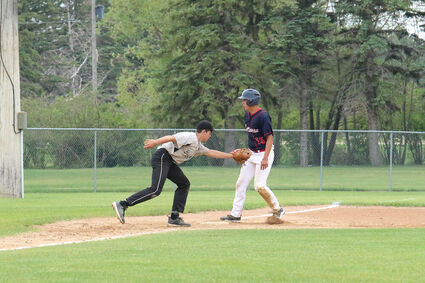 Third baseman Alex Weisenburger attempts to tag out a Bottineau runner. The umpire determined he was safe.

The New Rockford-Sheyenne Babe Ruth played a District 2 doubleheader against Bottineau on July 6 in New Rockford, dropping both games.

The first game was a blow out from the start and Bottineau won 16-4 in five innings. Bottineau built an 8-1 lead in the first two innings and they just kept on adding runs. Luke Yri started at pitcher and pitched over 100 pitches in only 3 innings of work.