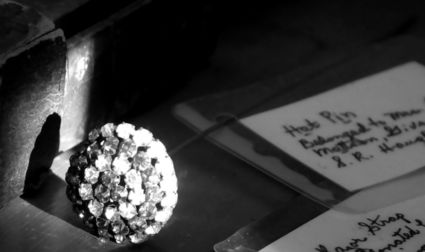 Hat pins were once a commonly used tool that was both beautiful in design and strategic in function. The pins usually measured eight inches in length or more, and fulfilled one purpose­- to secure a hat onto a woman's head.

It was a useful and necessary tool, especially as hats increased in size, weight and texture. The way they worked was simple, passing through the hat and catching in a bun of hair underneath. Their practicality could not be overstated, as no one wanted their beautiful hat to blow away in the wind.

The history of hat pins extends back at least to the middle ages, when small pins were used to hold bonnets, veils and other hair coverings in place. The expectation for women to keep their hair covered remained a cultural preference that continued for nearly 400 years.

But, as we know, culture inevitably changes, and in the mid-19th century, head coverings took on a new embellished look. Soon hat pins went from a simple metal pin to a fashion statement of their own. For decades, hat pins held women together and kept them from becoming disheveled messes each time the wind blew.

Over time, hats grew in size and so did hat pins, with some measuring more that 12 inches long. In the early 1900s, news outlets made reports of women who had fought off and subsequently injured potentially predatory men. It wasn't long before the hat pin was considered an international threat.

In 1909, the City of Chicago declared that hat pins should not be more than nine inches in length. Any pins greater in length were considered deadly weapons. As a result, any woman caught in violation would be arrested and fined $50.

Less than a decade later, the onset of World War I forever altered the world of fashion, eventually leading to the decline of women's hats and ultimately the hat pin.