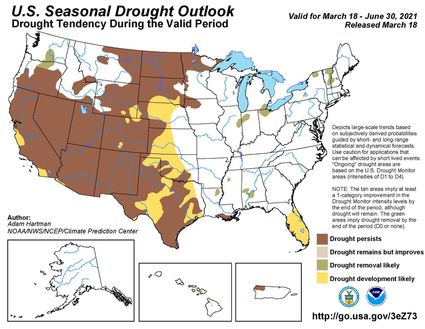 On Monday, March 22, the Eddy County Commission issued a Fire Emergency Declaration and Burn Ban Proclamation for the county. This gives the commission the authority to automatically put a burn ban into effect when the North Dakota Fire Danger Rating is Very High or Extreme, and/or a Red Flag Warning has been issued for the county.

When the county's fire danger rises into the "very high" or "extreme" category, the following activities are restricted: burning of crop land, garbage burning, campfires, unauthorized off-road motorized travel, and smoking except for in an improved area, with a radius of three feet that is free of flammable debris.

Residents should note that the proclamation does not disallow all burning at all times, just puts in place a system that will trigger an effective ban on burning, when extreme conditions exist. Conditions can and do change rapidly, so it is important that residents check current fire conditions before burning.

The full text of Eddy County's ban is published on page A8.

Wells County put a similar ban in place on March 15, and the Foster County Commission declared its fire emergency March 16. As of Wednesday, there were 37 North Dakota counties with some sort of burn ban restrictions in place.

Our area is in a severe drought, and therefore, is at increased risk for grass fires and wildfires. This could become an even greater concern as the spring wears on, if we do not see a fair amount of precipitation. According to the National Weather Service's March 23 Drought Briefing, North Dakota is consistently favored for above average temperatures through the spring and summer. The level of precipitation the state can expect is a bit less predictable, however, with models leaning towards an "average" season for precipitation. If the state experiences above normal temperatures and below normal precipitation, the drought conditions will persist and may in fact, worsen.

The pendulum has swung from one extreme to the other, with 2019 being the second wettest on record and 2020 the third driest, according to the National Weather Service. Bismarck recorded just 8.42" of precipitation in 2020, compared to 29.58" in 2019.

The public plays a valuable role in preventing wildfires. The national average of human-caused wildfires comprises 87 percent of all wildfire occurrences every year. For fire prevention tips and resources, click on the "Public Education" tab at http://www.nfpa.org.

WHEREAS, several rural fires have already occurred as a result of the conditions; and

WHEREAS, all available resources remain committed to the protection of life and property; and

WHEREAS, the existing conditions make fires a continuing threat to the health, safety and well-being of the citizens of Eddy County; and

WHEREAS, the cost of emergency response and inordinate wear on fire-fighting equipment may be far in excess of available county resources; and

NOW, THEREFORE, BE IT RESOLVED that the Board of Eddy County Commissioners declares a fire emergency for all of Eddy County including all of its incorporated cities; and

BE IT FURTHER RESOLVED that the board of commissioners proclaims that a Burn Ban is in effect until further notice, whenever the North Dakota fire danger rating is Very High or Extreme and/or a Red Flag Warning has been issued in Eddy County and a local burn ban may only be issued upon a declaration of a local emergency or disaster pursuant to N.D.C.C. 37-17.1-10. In order for it to be enforceable, a fire emergency would have to be declared and within that declaration a burn ban or restrictions can be outlined.

The Burn Ban encompasses all of the county’s incorporated cities. The Burn Ban includes; burning of crop land, garbage burnings, campfires, unauthorized off-road motorized travel and smoking, except for in an improved area with a radius of three (3) feet that is free of flammable debris.

ANY INDIVIDUAL WHO WILLFULLY VIOLATES THIS BURN BAN IS GUILTY OF A CLASS B MISDEMEANOR (NDCC 37-17.1-10.1) PUNISHABLE BY A FINE OF UP TO $1,500.00 AND 30 DAYS IN JAIL. THE EDDY COUNTY SHERIFF’S DEPARTMENT IS AUTHORIZED TO ISSUE CITATIONS TO VIOLATORS.

The burn ban / fire restrictions will be rescinded when fire danger conditions have improved and/or previously diminished fire response capabilities have been restored and has been voted on by the Eddy County Commission.