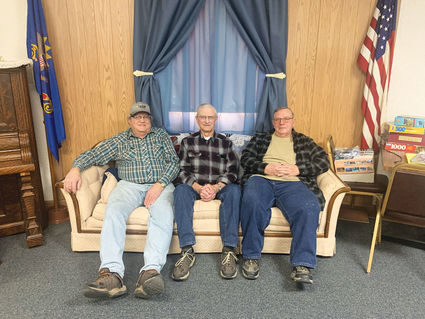 Eddy County Transportation drivers Norris Kjos, Dennis Koenig and Laurice Swenson and were recognized by the Chamber of Commerce for their quality service to the county's residents.

Their behind-the-wheel skill is top notch, and their front-door service is much appreciated. The March Employees of the Month are none other than the three men who drive for Eddy County Transportation. Laurice Swenson, Norris Kjos and Dennis Koenig were honored by the New Rockford Area Chamber of Commerce on Wednesday.

Public transit is an essential service, and residents are grateful to have Eddy County Transportation fulfilling the needs of residents in New Rockford and Sheyenne.

Rows of bus passes adorned the desk at the New Rockford Senior Center that serves as the home base and command central for all three drivers. Fun fact: none of them were drivers in their professional lives.

When asked how they came to be bus drivers, Koenig quipped, "I only joined because these two talked me into it."

"I got bored being retired, and Norris, he just didn't know better," Swenson joked.

All joking aside, they all enjoy their time at the wheel, as it affords them the opportunity to see their friends and neighbors, while making sure they get them to their appointments on time and complete their shopping at their leisure.

Seated at his desk, Swenson reviewed his pen-and-paper log, counting 61 potential riders for Wednesday alone. He said the public transit averages 55-60 rides a day on the in-town bus, for which he and Kjos split duties. Koenig primarily drives the van designated for out-of-town trips, and averages three or four trips a week. Residents of New Rockford and Sheyenne can travel to and from Devils Lake or Carrington using the service.

Eddy County Transportation is available weekdays from 7:30 a.m. to 4 p.m., offering rides to residents ofall ages and abilities, with wheelchair accessible vehicles and front-door service. In fact, the county's smallest residents are among the biggest users of the public transit system. Kjos said he has had as many as 21 kids to pick up at one time. With two sessions of preschool during the day, and elementary students to pick up before and after school, they make 10 trips to and from the New Rockford school and East Central (where the preschool program is currently held) every day.

Pandemic precautions have affected their operations as well, even though the bus has capacity for 13 riders, it is now limited to just seven riders at a time. The capacity restrictions have caused drivers to make nearly twice as many trips to the school as they did in the past, as there are often more than seven students riding. As a result, the drivers came up with a system that splits the community into two routes, one each traveling east and west of the BNSF railroad tracks to homes and daycares. After school, they take one route at a time, returning for others, after the first riders are taken home. Riders are required to wear masks at all times.

Riders can purchase a bus pass for $20, which is good for 20 rides on the transit bus as needed. And, gone are the days of keeping that pass in your pocket or purse. The drivers manage the passes as part of their end-of-day paperwork duties. They make note of who is riding as they board the bus, and then at the end of the day, they mark the passes of each rider who had been on board that day. When a rider's pass has about four to five rides remaining, they call to inform them that they need to purchase another pass.

All three of the drivers are North Dakota natives, but that's about the only place where their professional paths crossed, before becoming co-workers at Eddy County Transportation.

Swenson was born and raised in Devils Lake. He served in the U.S. Navy during the Vietnam War, where he was involved with the search and rescue of helicopter pilots that had been shot down. He was a helicopter mechanic in Portland, Oregon early in life, then later worked at Nordic Fiberglass in Devils Lake.

Koenig hails from Robinson, where his family farmed. His first job off the farm was at the Cenex in Fessenden. Then, after four years in tooling at aerospace giant, Boeing, in Seattle, Wash., he and his wife Caroyl returned to North Dakota, where they operated service stations in three different locations in New Rockford. Most recently, they operated Pioneer Auto in partnership with David Jenrich for 30 years, before retiring in 2011.

Kjos is a New Rockford native. He worked in maintenance at the New Rockford school for 26 years, then made a switch to Erickson Implement in Carrington for a time. For the past six years, he has managed the Carrington bowling alley.

They were nominated by Sharon Young, who said she appreciates that she can count on them to pick her up at her front door and drop her off at her destination. The service is available to anyone who needs it. To schedule a ride with Eddy County Transportation, call (701) 302-0324.

The Chamber of Commerce is seeking nominations for the Employee of the Month award. Have you experienced great service, or know of someone who consistently works to ensure that his or her customers are satisfied? Submit a nomination by filling out the card on the bulletin boards at local businesses, or go online to http://www.cityofnewrockford.com/chamber and download a form to complete and return it to the Transcript office. Email nominations are also welcome and should be sent to [email protected] One award is handed out per month.