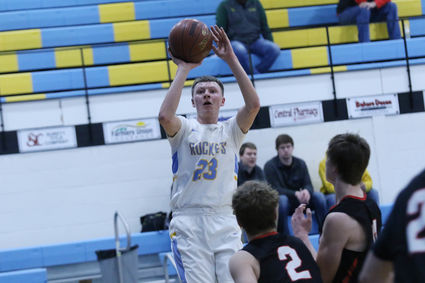 Senior Johnny Grann puts up a shot at the three-point line. Grann put up eight three-pointers in the Region 4 Tournament against North Star on Monday, March 8.

The New Rockford-Sheyenne Rockets hosted the North Star Bearcats in the first round of the Region 4 Tournament on Monday, March 8. The Bearcats defeated the Rockets in double overtime with a score of 72-67.

The Bearcats came out of the gates strong and determined to beat the Rockets. Freshman Dane Hagler put up two three-pointers in the first quarter along with junior Thomas Nikolaisen, who put...