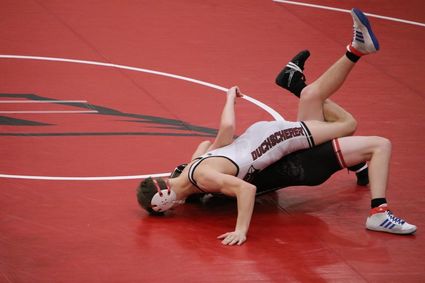 Matthew Duchscherer, a junior at New Rockford-Sheyenne High School, does a cross faced turk on LaMoure wrestler, Dustin Ketterling, during the quad dual on Saturday, January 16 in Carrington.

Matthew Duchscherer, a student at New Rockford-Sheyenne High School, is dominating on the high school wrestling mat thus far in 2020-21.

The junior, who wrestles at 126 pounds for the Carrington Cardinals, is currently the top-ranked wrestler in the state at that weight class, and has yet to lose a match this season with a 16-0 individual record.

He has been wrestling at the youth, junior high and high school levels for nine years, and is a two-time Class B individual tournament place winner, taking third place last season at 120 pounds and fifth place at 106 pounds during his freshman year. One of his personal goals is to win a state championship both as an individual wrestler and as part of the Cardinal team.

His other hobby is dirt track racing, of which he partakes with his dad and uncles during the summers.

He is the son of Todd and Renae Duchscherer of New Rockford.