Rockets get the edge over G-M Titans 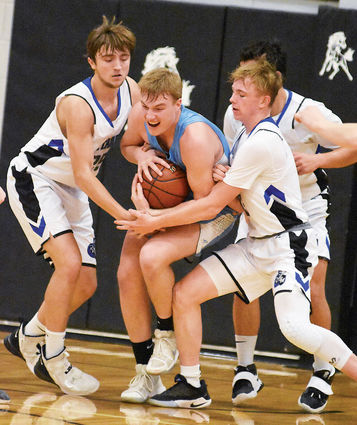 Nick Berglund, center, battles to keep possession as he is guarded by Griggs/Midkota's Trae Kaelberer, left, and Jayden Sherrard, right.

The New Rockford-Sheyenne Rockets improved to 4-1 on the still-young season with a 61-51 win in Kensal Tuesday night, December 22, over the Griggs/Midkota Titans.

Johnny Grann got the Rocket train rolling with 11 first quarter points, as his efforts provided an out sized portion of a 17-10 first quarter lead for NR-S. Grann had two threes in that period.

The Rockets kept the Titans at bay in th...