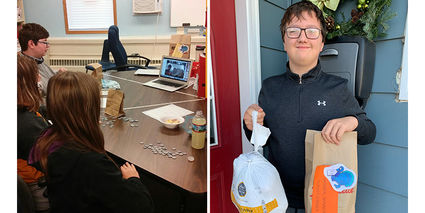 Best Of Buddies held its first virtual group event on Friday, November 20. A total of 27 students from New Rockford, Carrington, Kensal, Pingree and Fessenden-Bowdon schools gathered virtually via Zoom, both from their respective schools and from home.

Vickie Becvar, Transition Coordinator at East Central Center for Exceptional Children, said Thursday that the group had originally planned to get together at the Community Center in Pingree to enjoy a turkey dinner potluck and play board games. However, due to COVID-19 gathering restrictions put in place earlier this month, the space was not conducive for having the students and staff get together safely. Staff approached the students about trying something different, and the students agreed that getting together virtually was better than not being about to gather at all.

The Thanksgiving party, held via Zoom, started with each person introducing himself and reciting "I am Thankful for..." All played Turkey Bingo with door prizes consisting of treat bags and items/groceries needed to prepare a Thanksgiving feast. Contents included not only food items such as cranberries and stuffing but also utensils needed to prepare the food, such as a gravy ladle, potato peeler and oven mitts.

Talan Gehrtz of New Rockford was the lucky winner of a turkey donated by Miller's Fresh Foods. Additionally, four more turkeys were given away, one each donated from Tracy's Market in Fessenden, Leevers Foods in Carrington, and Hugo's in Jamestown. Winner Winner Turkey Dinner bags were donated by Cash and Carry Lumber of New Rockford.

Before leaving the meeting, the buddies discussed possible activities for December. Tubing and sledding topped the list, assuming there's snow. All were in agreement that if they can't gather as a group, they are willing to do another virtual event.

Two students from Fessenden said they "loved it and had a BLAST."