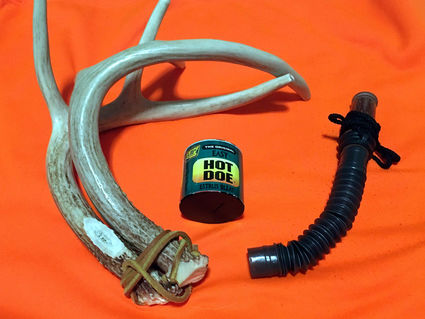 Rattling Antlers, a doe bleat and a grunt tube make up the three primary calls used by hunters to draw deer in. Bucks are more susceptible to these noisemakers in the rut than at any other time of year.

While silence in pursuit of deer is an important factor in setting up a successful hunt, as the rut approaches, making the right noise can be key in bringing a big buck in. With dozens of affordable methods available and deer firearms seasons across the upper Midwest rapidly approaching, now may be the time to add some calls to your arsenal and help seal the deal in the field this November.

Rattling antlers can be employed all season long with some success, but the best time of the year is just around the corner. The sound of whacking antlers and crashing bone draws deer in from a distance, particularly when bucks are breaking down their territory through displays of dominance. A variety of options exist beyond making your own set from a previously harvested buck's headgear, and they are often lighter, safer and easier to use on stand or in the blind. Antler bags are compact and easy to carry into the field or up into the stand. Able to be worked covertly with a quick roll between hands, the antler bag can be increased in volume by adding in more sticks or elevated as conditions and the

Employ rattling antlers on morning sits when the air is cool and calm. On windy days, the sound will not travel as well and they may require a little more muscle. As the rut approaches and peaks, bucks will be aggressive and edgy, and the noise of two other males intruding on the dominant deer's territory will bring him in. Start with slight clicks and clacks and grow your cadence into an aggressive battle over a minute or two, and then fade back down and stop. If you're on the ground, add in a couple thumps in the dirt or grass to add some realism in your battle. Keep your eyes on brush and cover downwind from your hunting site, as big bucks are careful and will want to know what they're getting into, using both scent and sight to assess the situation before moving into shooting range.

In addition to the sound of crunching antlers, vocalizations are key as the firearms season approaches and spans the rutting phase. Doe calls and buck grunts are two primary options for hunters to talk to nearby deer and bring them in.

Nothing brings a buck in like the sound of a doe ready to mate, and a simple tip-over can call is one of the premier offerings available for sportsmen taking to the field this November. Simply tip the can over and turn it back up, and a low estrous bleat is emitted, simulating a female deer ready to breed. Give a couple tips of the can and wait to see what happens. Cover it with a gloved hand to soften the bleat on calm days, or leave it uncovered when breezes blow or in the peak of the rut to get that "come hither" call out to nearby bucks.

Grunt calls are inexpensive and exciting additions to any deer hunter's arsenal, and are best used to lure in those bucks that hang up on the edge of an area, but can have startling effects when no deer appear to be around. These calls are great standard offerings to help explore the potential of various grunts from doe tending activity, to sub-dominant buck challenges, to simulating the biggest buck in the bunch. With flexible tubes, the sounds from these calls can be projected in a variety of directions or deepened in tone by extending the plastic down and away from the mouthpiece. Practice calls based on what you hear in the field or check out online tutorials on how to simulate various deer sounds and exchanges, from the slight tending grunt to an aggressive challenge.

If you're talking deer hunting, any sportsman worth his salt has an auditory option or two at his fingertips while in the field. So, grab some rattling antlers, a doe bleat and a grunt tube and get some practice in before this year's firearms season kicks off and answer the call of the wild, and possibly that of your biggest buck ever.