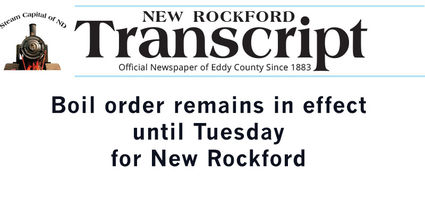 The boil order for New Rockford remains in effect through Tuesday, Oct. 20.

Public Works Superintendent Bruce Hirchert said Sunday that tests conducted Saturday came back negative for E.coli. Therefore, there is no E.coli in the system. However, two of the five tests came back positive for total coliform. Total coliforms include bacteria that are found in the soil, in water that has been influenced by surface water, and in human or animal waste. According to the N.D. Department of Environmental Quality, "total coliform is not a health threat in itself; it is used to indicate whether other potentially harmful bacteria may be present." Therefore, out of an abundance of caution, the boil order remains in effort for the City of New Rockford until at least Tuesday.

Another round of samples will be taken on Monday with results expected Tuesday.