Steamers ready to roll into town this weekend 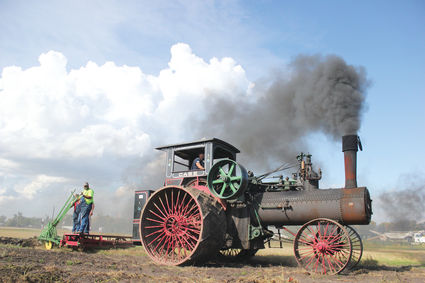 A Case steam engine operated by Kory Anderson of Andover, S.D. plows through the north field during the 2019 show.

Yes, we're known as the Steam Engine Capital of North Dakota, so we couldn't let a year go by without an annual reunion of steamers!

The Central North Dakota Steam Threshers Association is gearing up for its 62nd annual show this Friday, Saturday and Sunday, and stationary engines of all kinds will be proudly featured at the Eddy County Fairgrounds northwest of New Rockford.

The newly-constructed diesel building is ready for visitors, and will be the place to see several rare gas and diesel engines up close. Among them is a Fairbanks Morse 75 hp, twin cylinder, 2-cycle Type Y diesel. The engine was originally built to generate electricity for the City of Ashley, and was then sold to the community of Sharon in 1930, providing power to that city until 1948.

Steamer Stephen Schauer of Arthur, N.D. has over 40 stationary engines in his collection. At the young age of 12, he decided to take small engines as a 4-H project. With $250 to spend, he went to a swap meet in LeSeuer with his dad and his godfather, where he found an International 11/2-21/2. LB with a brass crank. He still operates and displays that engine at the show, and aims to keep it interesting by trying to have something new to delight attendees each year.

On display for the first time this year will be another stationary engine, a 1910 50 HP Gaar Scott skid engine owned by Jon Jury of Valley City, N.D., and Lance Straabe and Lucas Jury of Hope, N.D. all longtime members of the CNDSTR. Jon Jury served as president of the organization from 1987 - 2002, and his son Lucas Jury is serving his first term as a director.

The skid engine, purchased in Mason, Michigan earlier this year, is one of a kind and was used to power an apple cider processing plant in Michigan. The engine was restored by Scott Somerville of Mason, Michigan. The pieces to the engine were spread out amongst five buildings of the previous owner to the Somervilles and the engine was restored using every original nut and bolt found in the buildings. The engine has been fired just three times since the restoration. The pristine condition of the engine is a testament to the expert knowledge and craftsmanship Scott Somerville and family have exhibited in the restoration of the antique steam engines of yesteryear.

The engine will be in operation at the reunion at the new permanent sawmill, Cuttin R Close, constructed last year. The sawmill, owned by Mark Pedersen of Luverne, N.D., was purchased in Fullerton, N.D. after the last threshing reunion was held in 2012. Lucas Jury and Lance Straabe rebuilt the track the carriage runs on, and with help from several volunteers the first logs were cut on Sunday of the 2019 reunion after two days of a record rainfall.Visitors to the show can expect to see all the major attractions, including the daily Parade of Engines, agricultural demonstrations, live music, food vendors, and the kids pedal pull and Northern Pullers Tractor Pull. 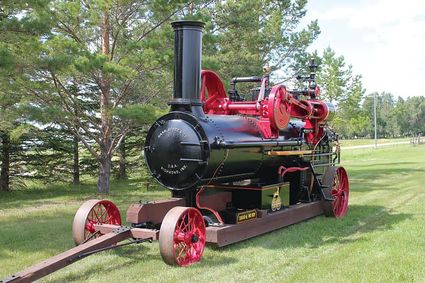 This 1910 Gaar Scott stationary engine will be in action for the first time at this year's show.

A new event this year is the slow tractor race. Drivers will find out just how "slow" they can go, and the last one to the finish line wins! The slow races are set for Friday and Saturday at 11 a.m. in front of the Crow's Nest.

As we are amidst a pandemic, visitors will notice some changes. Those who purchase Thresherman's Breakfast in the Cook Car will need to take their meal "to go" so to speak. Tables will be set up in the Potter Pavilion, outside around the grounds, and in the tent.

The church service has been moved to the Potter Pavilion to allow for social distancing, and an extra cleaning crew will be on hand to sanitize frequently used areas such as restrooms.

There's plenty of room to move safely around the outdoor grounds, so mask up, give yourselves some space and enjoy the show!

For more information about the show, see the ad on page B4 or go online to http://www.cndstr.com.