What does ratification of the 19th Amendment mean today? 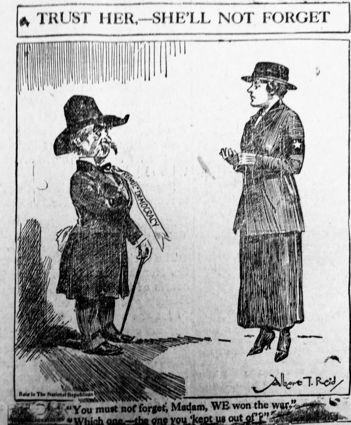 This cartoon, titled, "Trust her,­- she'll not forget," appeared in an edition of the "New Rockford Transcript" in May 1920. The punchline reads, Man: "You must not forget, Madam, WE won the war." Woman: "Which one-the one you 'kept us out of'?"

(Excerpts from Justice Lisa Fair McEvers remarks on the 100th anniversary of North Dakota's ratification of the 19th Amendment.)

One hundred years ago, when my mother was born in 1919, my grandmother did not have the right to vote in most elections.

When I refer to "most elections," that's because women in North Dakota did have a limited right to vote prior to passage of the 19th Amendment. S...