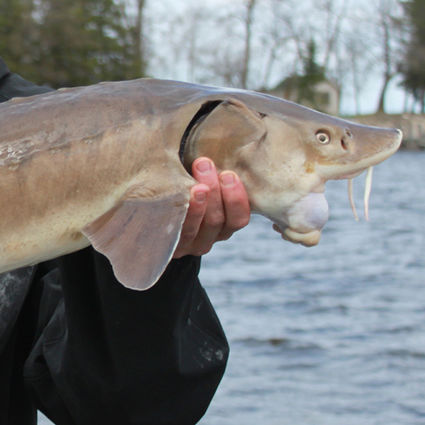 Better Left Alone? While the lake sturgeon populations in the U.S. have rebounded due to careful management practices, scientists in Europe are using genetic manipulation in hopes of restoring a semblance of a Russian sturgeon population in waters where they've been overharvested for caviar.

While better reserved for a time closer to Halloween, with recent reports of successful cross-breeding

overharvest of the source sturgeon species, the "sturddlefish" as it's known, is just one aquatic oddball

in a list of man-made mixes of two fish species. What follows are the tales – perhaps cautionary ones –

of recent history's strange hybrids and genetic tweaks made by man, some of which have escaped into

he wild, or been purposely put there for food, sport or another reason.

sturgeon, the sturddlefish is what the makers of the roughly two-thirds sturgeon, one-third paddlefish

called it. Originally planned to provide only the sperm, and not its DNA to help the endangered Russian

sturgeon to develop eggs and reproduce, a number of offspring resulted from the donation of the

paddlefish. They look more like sturgeon, and the two variants have differing snout lengths. Those

created species are now held in a Hungarian research facility, where the biologists assure us that they'll

never reach the open waters. That guarantee is something heard before with a fish that would never

have been without man's intervention.

profitable for a few select companies, the creation of a rainbow trout with three sets of chromosomes

Pacific Seafood along the Columbia River in Washington state. In 2011, when a hole developed in the

protective netting, more than 117,000 of these genetically-modified rainbow trout escaped into the

waters of the flow. Their voracious appetite caused appropriate concern after their escape that they

may threaten native salmon stocks, and a special season was set for the fish. Additionally, the

occurrence of triploid rainbow trout in Diefenbaker Lake in Alberta, Canada was highlighted by Field;

sequence. While the extra set of chromosomes increases growth of the fish, it likely limits lifespan and

overall heath of the fish by creating a weaker immune system.

While cross-breeding of largemouth bass and smallmouth bass is only rarely observed in the wild, for

two decades starting in the 1960s, it was the focus of Dr. William Childers and his efforts to join

the "meanmouth bass," legend has it that the good doctor observed a school of his trademark beasts

Piranha, and a similar sighting of the fish teaming up to assault a dog that had waded into the water

cemented the anger-oriented nickname. Whether or not those stories are true, the meanmouth is most

where smallmouth co-exist with either largemouth or spotted bass. Efforts to stock meanmouth bass as

a fast-growing alternative to the parent species faded in the 1980s, and the natural hybrids are only

While nature provides its share of fish that wreak havoc on aquatic ecosystems – common carp, bighead

carp, snakeheads and the like that are transported by man to new places – humankind has further

intervened by playing God with certain species, often to their detriment, and possibly to our own fishing

opportunities. To paraphrase the fictional doctor Ian Malcom, played by Jeff Goldblum in the Jurassic

Park series of movies, too often we think of if we could do something, rather than if we should do

something, when it comes to the manipulation of fish for food or just for the fun of it.