Where Are They Now?: The Brotherhood of Nicolai Men 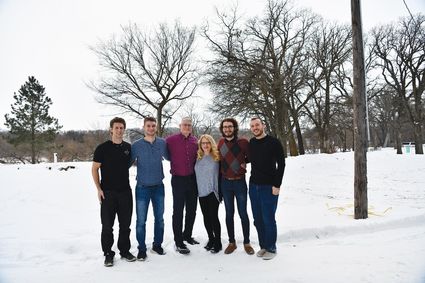 Dr. Mike and Cheri Nicolai (center) raised their four sons in New Rockford. They are pictured from left to right: Noah, Isaiah, Micah and Seth.

Cheri and Mike Nicolai needed to balance fair discipline and compassion when they raised their four active boys. This nurturing formula worked well as Noah, Seth, Isaiah and Micah have grown into caring, responsible and trustworthy young men who are more than just "North Dakota nice." Each of these men has his own special skill that sets him apart from his brothers and has served him well in his current working or educational situation.

The oldest, Noah (his 31st birthday is today, July 20!) has an "amazing ability to interpret information and seek connections between things that seem unrelated," according to his brother Seth, who will turn 30 years old in October. Noah is a 2008 New Rockford-Sheyenne graduate, followed closely by brother Seth in the class of 2009. Noah has observed that Seth is "extremely intelligent, a genius with numbers, and super business savvy."

Next in line is Isaiah, the "computer wizard." Isaiah (26) graduated from high school in 2013, and his specialty is coding, which uses programming languages to give computers and machines instructions on what actions to perform. The youngest of the family is Micah (will turn 21 in August), who graduated with the NR-S Class of 2018. DPRCA fans know of Micah's tremendous skill on the stage. Noah and Seth say that Micah is "a superior musician" and "a brilliant performer." Isaiah, who is in the Air Force, admits that it is difficult to narrow down a specific skill for each of his brothers, but he lightheartedly teases, "Currently, I would say I'm jealous of the 'talent' of growing out their hair since the military doesn't exactly allow that!"

Two of the brothers are currently taking college classes. Noah recently completed his eighth quarter in the Doctor of Chiropractic program at Life University near Atlanta, Ga. He has slightly over a year and a half of school remaining before graduation. Taking more than the normal load of 25 credits per quarter, Noah won't have to take classes his last two quarters. By "peaking," Noah can then work at a chiropractic office for 6 months with the option of an out-of-state situation.

Micah is also a college student, but in an entirely different field and in a very different university. Completing 2 years at NDSU so far, Micah is majoring in vocal music performance with a minor in theatre arts. Unfortunately, COVID-19 caused the cancellation of this summer's DPRCA production of "Little Shop of Horrors," in which Micah would have gained more stage experience to enhance his studies.

Seth and Isaiah, the two "middle men," are currently employed in extremely dissimilar types of jobs. Seth lives in the Tampa, Fla., area and is part of a global project for the world's top accounting firm Deloitte to improve the company's products. He works and meets through Zoom with people from approximately 30 different countries. In his spare time, he researches an accounting topic he has been assigned. Seth has been with Deloitte for 5 years. On the flip side, Isaiah also works on an international mission, but it is to defend cybersecurity for the Air Force. He leads a small team of enlisted Air Force personnel and government civilians to protect government computer networks against Advanced Persistent Threat (APT) actors. Isaiah works at the Scott Air Force Base just outside St. Louis, Mo.

Although the four brothers live in two different time zones and have diverse experiences and challenges in front of them, they all started in the same household. Both Noah and Seth were born in Fargo, and Isaiah was born in Davenport, Iowa, where his father Mike was completing chiropractic school. The family moved to New Rockford in December of 1996 when Mike bought the chiropractic office from his brother Chuck Nicolai. Three years later, young Noah, Seth and Isaiah welcomed their fourth brother into the family when Micah was born in Devils Lake in 1999. A full-time nurse for about 12 years, Cheri took time off to be a stay-at-home mom to her boys. When the boys were older, she made a significant employment change and has been working at the school as a paraprofessional for more than 10 years.

All four Nicolai brothers assert that their growing up years were great, but they imagine that it was crazy for their mother Cheri! Plenty of rough-housing was certain to take place on a daily basis, but many fun times were spent together competing in sports, collecting Pokémon cards and playing video games. As they matured, any mean-spirited actions they may have displayed toward each other transformed into protective bonds among the brothers. Now, even as they are spread out in four different states, they stay in frequent contact through a brothers' Snapchat, share the new Pokémon they have caught in a "Pokémon Go" group chat and exchange funny memes with each other.

For a time, the family lived across the alley from their grandparents, Sandie and Vincent Nicolai. This was such an advantage for the boys to spend time at Grandma and Grandpa's house after school. "It was a real blessing, to say the least," Noah affirms. Living in a small community often means that grandparents are available and everyone knows almost everyone else. You can wave at people and they wave back (even if they don't know you!). It also means small classes (Micah's class is one of the smallest ever to graduate from NR-S with a grand total of 15 students) and caring teachers who encourage students' potential. Some of the instructors the boys especially remember who helped them reach their goals are Annette Hovey, Kent Brown, Scott Rerick, Craig Demester, Sandra Bekken, Deb Burgad and Loren Nieuwsma.

The brothers were taught to develop a good work ethic, and they held various jobs throughout their high school and college years. Three of the boys did janitorial work at their dad's office. Other employment ventures have been beekeeper, summer camp basketball coach, NR-S school technology assistant, barista, actor, convenience store assistant manager, Lowe's kitchen designer and Carrington Research Extension Center field worker. Unfortunately, not one of the four brothers has achieved their childhood dream careers of a train conductor, owner of a parkour gym ("parkour" is a French word that means "a training discipline using movement"), an NBA player, or a marine biologist.

From getting rid of cable to promote more reading among his boys and installing a light on the garage so the brothers could play basketball late into the night, Mike instilled monumental values in his four boys so that they would utilize their skills to benefit not only themselves but those around them. Important lessons Noah, Seth, Isaiah and Micah have garnered from their parents are to have a good sense of right and wrong, know how to thrive as adults, be grateful for what they have, think outside the box so they can have open minds, look out for others, and to be compassionate and nonjudgmental toward other people. The men seem to have the same basic life philosophy, which is to be a good person.

Isaiah says it best: "[Being a good person] may seem simple, but it can be applied to almost any aspect of life. It costs nothing to be kind, and I feel if you try to be a good person in all aspects of your daily life, then you're on the right path."

This is the final installment of the monthly "Where Are They Now?" series that Kristi Frahm will write. After featuring 76 New Rockford-Sheyenne graduates in 38 different articles from June of 2017 to the present, it is time for her to seek out other adventures!

Prior to the graduate update series, Frahm had also written 20 other monthly articles for the "Transcript," beginning with a contest piece she submitted in February of 2016. "It has been such a pleasure meeting with so many different people and telling their amazing stories. I hope you have enjoyed reading them!" Frahm said.

Anyone interested in a flexible, part-time gig writing amazing articles for this newspaper should contact us at (701) 947-2417 or email [email protected]