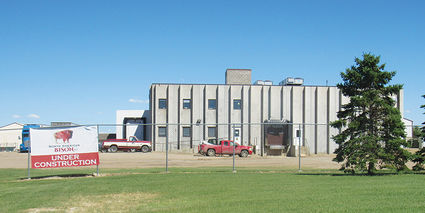 A large "Under Construction" banner flanks the fence in front of North American Bison, facility south of New Rockford. The company hopes to open its newly-expanded facility in the spring of 2021.

One of Eddy County's largest employers is expanding its footprint in the community.

North American Bison, LLC, (NAB) plans to double the square footage of its New Rockford manufacturing facility and bring all facets of its operations together here, announced Mike Jacobson, Vice President of Operations for the company.

The expansion plans were on the drawing board more than six months ago. As e...