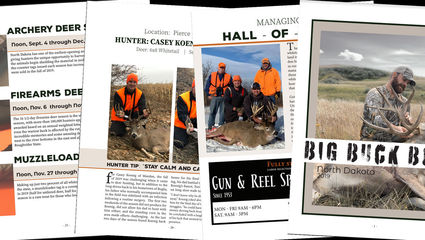 The Big Buck Book chronicles more than 30 incredible deer hunting adventures from 2019 and previews the upcoming deer seasons for 2020, continuing the excitement and tradition enjoyed by more than 90,000 people in North Dakota.

My weekly column, Our Outdoors, has chronicled the recent history of hunting, angling and my experiences, as well as myriad misadventures and sometimes-successful outings in the wild for the past two decades. It's my hope that it continues to entertain and educate for the next two decades, and maybe a few more after that if I'm lucky enough to still be able to share my take on what to do – and sometimes more importantly, what not to do – to get more from the increasingly precious and limited time we all seem to have in the outdoors..

It's been said that journalism is the first draft of history, so I often write down those happenings and hurdles I encountered just minutes or hours after walking in the door to keep that draft as clean as possible, as being an outdoorsman most such stories are allowed to be exaggerated after about 12 hours.

In recent months, however, I've taken on a new endeavor to track another part of that outdoor history byin the recording some incredible hunting stories which occurred last year throughout the state of North Dakota. These stories are not my own, but those of others like me.

As part of the 110-page publication dubbed the Big Buck Book, I have sat down with nearly four dozen deer hunters spanning the state, from its western rugged badlands to its eastern flowing farm fields and all places in between. I recorded their version of history and some amazing stories to go with the impressive mule deer and whitetail bucks they took in 2019.

The top stories – whether it be the record-breaking mule deer, the public-land hunter's face-to-face encounter with a whitetail, or the archer's first spot-and-stalk success – wrote themselves as the passion poured out in the words of each interviewee. In addition, I've included a snapshot of where we sit now, with the state's firearms deer lottery just completed and the opening day of archery season a mere eight weeks away. Along the path of putting the stories together, the experience has been consuming and at times, mind-altering.

Growing up a fan of high school basketball, and living and dying with every Tuesday and Friday night game amidst my schoolmates in the raucous Rat Pack cheering section at Valley City High School, The Hoopster – an annual publication that set out the records and returners of every high school basketball team in North Dakota – was the bible. Amid the statistics, author Don Hanson made his predictions for the year to come, and we waited for the newest copy to hit the resource center racks to review during study hall, to see where the Hi-Liners and our rivals from Jamestown, West Fargo and Wahpeton would fall in his predictions for the coming season. When I learned of his passing in 2018, I got to thinking, "what if we did The Hoopster for hunting?" I wondered that aloud to one of the publishers I write for and just like that, the Big Buck Book came to be.

Passing much of the post-deer-hunting season talking with the hunters at the forefront of the publication was an enjoyable experience. They'd reply to a random Facebook message I had sent a few days before, or call me out of the blue at the number I provided in an email or text to them after I tracked down their contact information.

While I heard a few "he walked to my corn pile and I shot him" type stories, most were of hard-fought victories over nature and the elements, or served as the successful culmination of a season or more's worth of watching, patterning, tracking and pursuing to find an amazing end. Some were tales of a first buck, and others came from hunters who had taken more than 50 in their lifetimes, but all those that made the cut – filled with adventure, advice, determination and dedication – encompass what it is to be a deer hunter.

From their tales came my opportunity to pen a first draft of deer hunting history for 2019, and hopefully set the standard for years to come. As archery, firearms and muzzleloader seasons fell into text, the quotes of each hunter set the stories alight with torches to guide me and all others who long for fall of the coming year. Strangely enough, the narratives set my nights alight as well, as in one week during February – at the height of my interviewing efforts - I recorded five separate and distinct dreams about deer hunting in my journal. This shows just how ingrained the passion can be and how the excitement from just a few stories can manifest itself in the coldest reaches of the calendar and subconscious, months ahead of any opening date.

Like the continuation of this column, it's my hope that the "Big Buck Book" becomes a standard bearer of sorts for the history of hunting in the years to come, as eager hunters share their success and provide insight into what went right and what's likely to happen in future seasons. With an eye toward adventure and a focus on the fine details and fantastic conclusions for each hunter, and what any hunt can possibly become with a little luck, effort and perseverance, the Big Buck Book will be as much a part of my calendar year as deer hunting is... in our outdoors.

The "Big Buck Book" is available for pre-order online at bigbuckbook.com and is published by Transcript Publishing of New Rockford, N.D.